Martin Castrogiovanni banned for stamping on foot of Scotland back 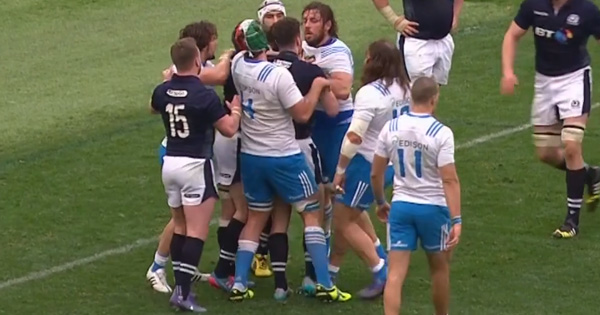 Italy prop Martin Castrogiovanni has been banned for two weeks for stamping on the foot of Scotland centre Duncan Taylor when the two sides got in a bit of a scuffle at the Stadio Olimpico in Rome on Saturday. Scotland won the match 36-20.

He appeared before a Disciplinary Committee, after the stamp went unnoticed during the match.

The committee reviewed all of the evidence and listened to representations made by, and on behalf of, Castrogiovanni in which he acknowledged that he had committed the act of foul play.

The Disciplinary Committee found that the act of foul play warranted a red card.

In considering the entry point for sanction, they assessed the seriousness of his actions and found that the act was at the lower end of World Rugby’s sanctions, carrying a two-week suspension.

Having considered the various mitigating factors involved, including the player’s admission and his regret at his actions, the committee found that these were not sufficient to merit a reduction in the entry point sanction, and suspended Castrogiovanni for two weeks.

While it wasn’t your traditional ‘stamp’, it was clearly petulant and deserving of punishment. He also went at it not once but twice, obviously making proper contact on the second attempt.

You could see Greig Laidlaw trying to alert Jaco Peyper to it, but with so many players doing that these days, Peyper obviously didn’t take it too seriously.