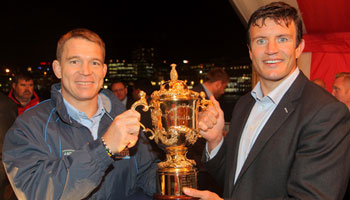 Former Test captains John Smit and Martin Corry got together recently to discuss the rivalry between South Africa and England at the Rugby World Cup. The two players battled it out in the Pool stages of Rugby World Cup 2007, as well as in the Final.

They also discussed the England vs South Africa clash in the 1999 Rugby World Cup Quarter Final, where Jannie De Beer booted England out of the tournament.

Smit and Corry, both having since retired, look ahead to the two sides potentially meeting in next year’s tournament, where they could see one another at the Quarter Final stage yet again.

Land-Rover is proud to be a worldwide partner of Rugby World Cup 2015 and a presenting partner of the Rugby World Cup Trophy Tour. Follow @LandRoverRugby on Twitter for exclusive video, imagery and insights from around the rugby world.