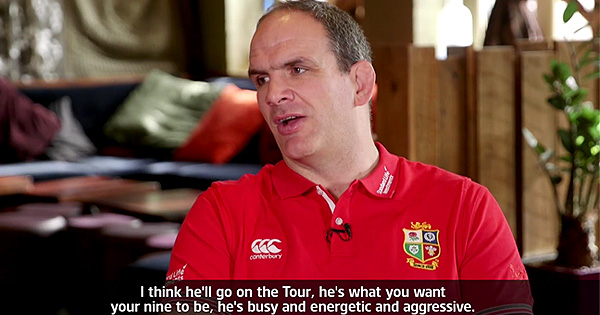 Following another fascinating weekend of Six Nations rugby, World Cup winner Martin Johnson has shared his thoughts on who he think should be on the plane to New Zealand with the British & Irish Lions, breaking down each match by picking out the key players.

Johnson is convinced England centre Jonathan Joseph is now in pole position for this summer’s Lions tour after his stunning hat-trick last weekend against Scotland.

Joseph was controversially axed by England boss Eddie Jones for the visit of Italy in round three of the Six Nations but the Bath centre, who started against France and Wales, showed just why he’s the Red Rose’s premier No.13 with a treble against the Auld Enemy.

This weekend against Ireland, Jones’ men will have the opportunity to make history as they go in search of back-to-back Grand Slam titles and also a new world record of 19 consecutive Test wins.

Perhaps the most competitive area of the present England side is in the second row – an area of the pack former England skipper Johnson knows all about.

In the absence of George Kruis and with Saracen Maro Itoje moving into the number six jersey, Jones has employed Northampton’s Courtney Lawes alongside Joe Launchbury. Although wearing the No.5 jersey, Lawes has been packing down in the back row at scrum-time, while his all-round play in the loose is more reminiscent of a marauding back rower.

Lions boss Gatland has promised to form the bulk of his tour selections on the form and fitness of those guys who have impressed during the Six Nations.

England No.8 Billy Vunipola missed the opening three games through injury; only returning as a replacement against Scotland last weekend.

He has been selected by England boss Jones from the start for the visit to Ireland this weekend and Johnson is not worried his elongated absence has affected his chances of touring New Zealand.

Johnson also spoke about who impressed him from Wales, Ireland and Scotland.