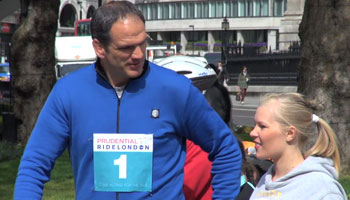 Martin Johnson is expecting East Midlands rivals Leicester Tigers and Northampton Saints to produce a ‘cracking’ Premiership final and the World Cup winner believes the side that better deals with the occasion will emerge triumphant.

Johnson, a five-time Premiership winner during his playing days with the Tigers, recalled losing in his final appearance for the club as London Wasps claimed the title despite Johnson’s men having beaten them three times during the regular season.

The former England captain and coach points to that factor as a reason why this year’s showpiece is too tough to call. “It is the ninth consecutive season the Tigers have reached the final, but it will be their only time so far against the Saints, who are appearing at this stage for the very first time.

“Leicester have been in a lot of consecutive finals and Northampton a lot of semi-finals so to get those two in a final at Twickenham is going to be fantastic for the East Midlands,” said Johnson, speaking while promoting Prudential RideLondon FreeCycle, an eight-mile bike ride through London during which he will take part in a Guinness World Record attempt.

“Neither side will want to lose to the other in that final so it should be a cracking game.

“My last game was a final and we went behind and ended up getting heavily beaten by a team we had beaten three times that year so anything can happen on any given day – you have to be able to deal with it and find a way to win.”