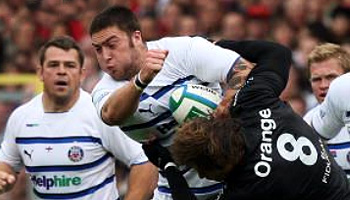 Bath came within seconds of pulling off a famous away victory over Toulouse on Sunday, but were denied at the end by a late David Skrela penalty kick. The match itself was a classic European encounter, memorable for more than a handful of stand out incidents.

Bath wing Matt Banahan impressed, and it’s two pieces of action from him that we’ve chosen to show you today.

We’ve featured Banahan a few times here on RD, and as with previous clips, this time is no different in that we see the man-mountain putting in a storming charge, as well as a crunching hit.

Yves Donguy of Toulouse is the unfortunate player tasked with tackling Banahan on this occasion, and as you can see, he’s no match for the 6ft7 giant from Jersey.

Later in the half fullback Maxime Medard then received a horrible floating pass that he looked to flick on. He messed up the flick, but more painfully, exposed his ribs and received a crunching hit from the 110kg wing.

We’ll try get other incidents up from the match over the next few days.