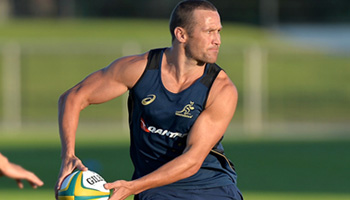 A few months back we wrote about how Matt Giteau could yet prove to be a key ingredient in the Wallabies’ World Cup campaign. Back then he wasn’t eligible for selection, but a turnaround has meant that he is now in camp, four years since last wearing gold and green.

The Australian Rugby Union relaxed their eligibility rulings to the point that Giteau, and Toulon teammate Drew Mitchell, are now able to play for their country despite plying their trade in the south of France. It’s a ruling that while logical, just didn’t seem on the cards.

Now, aged 32 and having won countless trophies with Toulon while playing with true greats of the game from all corners of the planet, Giteau finds himself back in the media spotlight.

While he’s completely humble and plays down the enormity of the change in policy, his presence, and probable Test selection, could prove a masterstroke for a prolifically talented group of Wallaby players who at times perhaps just need some direction and guidance.

Giteau says that his favoured position would be inside centre, but he’s just happy to contribute, while proving himself. “Every training session I am out there trying to prove myself and earn the respect of the players and the coaching staff,” he told Australia’s Daily Telegraph.

“A World Cup is a huge honour and a huge occasion. It is not something I want to take lightly, or disrespect the jersey by playing if I am not up to it.

“I have got to play in some big finals and we have won some comps. In those tight situations, those big games, you learn more and you become more relaxed. The more relaxed you are the better you are going to play, the more natural your game will be.”

The below chat with Rugby HQ offers excellent insight into how Giteau sees Top 14 vs Super Rugby, how physical Wallaby training is, and how his brother in law would never cut it in Union.

Michael Collins scored two tries to get the Ospreys’ United Rugby Championship season off to a winning start as they beat the Dragons 27-23 at Rodney Parade.