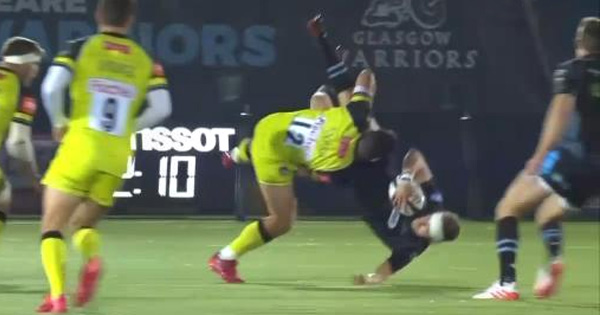 The former Wallaby got down low and picked up the Scotland international, tipping him past the horizontal and not bringing him down safely. Referee Mathieu Raynal and his TMO both agreed that due to the landing, a yellow card was sufficient.

While Toomua was no doubt simply attempting to be dominant in the tackle – and succeeded – the lifting motion and outcome of the movement made it a dangerous challene. If refereeing decisions in the last few years are anything to go by, this could easily have been a straight red card.

There was of course a reaction online, with opinions mixed and former Leicester Tiger’s flyhalf Andy Goode being one of those in the camp that felt it was actually the correct decision.

Matt Toomua’s yellow was correct, he lands on his back not his head so no red card. 6 years ago that was a brilliant physical tackle!

The general feeling seemed to be that if Russell hadn’t put his arm down to protect himself, the landing would have been a lot worse and Toomua would have been off for the rest of the game.

Regardless, Glasgow Warriors went on to completely dominate the Tigers, winning 42-13. It is the most points Leicester have ever conceded in a European Cup game.

It could get worse for them shortly too, as Toomua might find himself sidelined with a ban.

What was your reaction to the challenge?