Matt Utai gets sent off for a sweet high shot 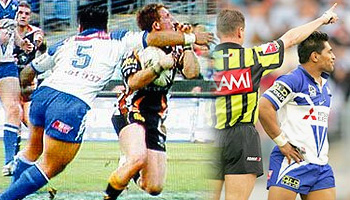 Utai became the first player sent off in 270 matches when referee Paul Simpkins gave him his marching orders for a high shot on rookie Tigers hooker Stuart Flanagan.

“He got me around the chops and I’ve got a bloody lip… it was justified,” Flanagan said.

With a motionless Flanagan laid out on Telstra Stadium, Tigers players immediately began yelling “He’s got to go mate” at Simpkins.

The whistleblower then allowed video referee Steve Clark to replay the incident before telling Utai: “You might have hit the ball, but we thought there was intent there, you’re gone.”