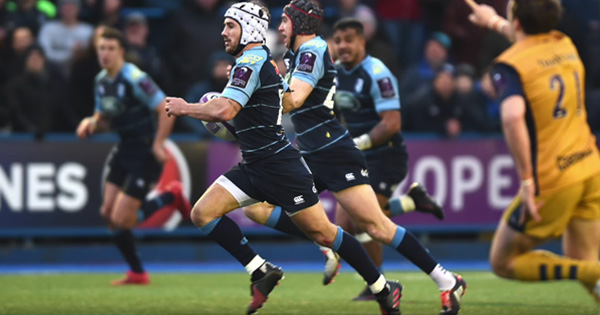 Cardiff Blues flyer Matthew Morgan scored this stunning solo try against former club Bristol at the weekend, his second of the night, helping his side to a 37-21 in their European Challenge Cup clash at Arms Park.

With roughly ten minutes left in the match, Morgan cut the line with an arching run then gassed any hopes of cover defence as he dived over to score a memorable try.

“It’s always nice to get one up over them and it’s nice to cross the line as well,” he said after tormenting his former club. “They kicked a bit loose to me in the second half which, obviously, I wasn’t complaining about. It just opened up nicely for me. There were a few gaps there.”

Coach Danny Wilson said that after putting pressure on kickers, Morgan can do the rest.

“He’s electric when he’s got that type of opportunity and I thought he was fantastic in that second half. If you kick loosely to him, his instinct and where to come back was superb. We saw that today and that’s why we’ve got him out there.”

Morgan, still just 24, was left out of Wales’ squad for the Six Nations.

There will be a highlights package from @ERChallengeCup this week but here’s a little taster. @matthewmorgan23 claims a stunning second pic.twitter.com/CWvZZAMPuc