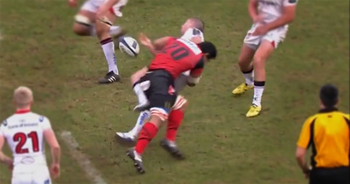 Oyonnax loose forward Maurie Fa’asavalu made this crunching hit on Ulster’s Ian Humphreys on the weekend, further adding to his reputation as one of the hardest hitting players in the game today. Humphreys was visibly shaken and had to leave the field due to the impact.

Samoan Fa’asavalu has been featured on RD before, the first time actually being in 2008 when he was demolished by Thomas Leuluai

In 2013 the big man was actually on the receiving end of a Chris Ashton high shot, then two years ago Fa’asavalu crunched Andrea Masi with another brutal hit.

This hit on Humpreys was equally bone-shuddering, and while the Ulsterman was able to shake it off eventually and even give a little wink and smile, he was still a little sore after the match.

“All good!! Neck and back a bit stiff but nothing major” he tweeted when someone checked to see if he still had everything in tact.

The hit was referred to the TMO but as you can see, it was perfectly legal.

Ulster won the match 56-3. You can watch the highlights on page two of this post