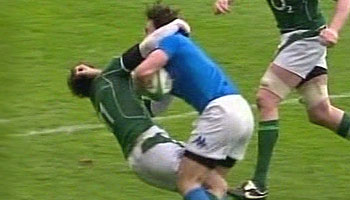 Physicality was not something that was missing in Italy’s performance against Ireland in the opening match the Six Nations. The tackles came on thick and fast from the Italian back-row, from the likes Mauro Bergamasco and Sergio Parisse especially.

Even Irish captain Brian O’Driscoll began to feel the intensity and needed a breather after getting drilled by open-side Bergamasco. Geordan Murphy also got a taste of the action when he and a rampaging Bergamasco collided in the second half.

Despite the physicality though, both sides lacked a little bit of direction and the game struggled to find its rhythm. Dempsey and Castrogiovanni were the only try scorers, with Ronan O’Gara being the eventual difference between the two sides.

Stay tuned for highlight packages and for all the rest of the nitty-gritty from the 2008 Six Nations.