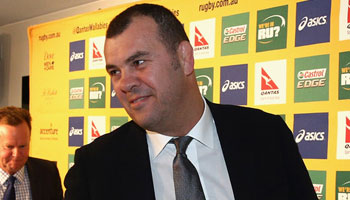 Michael Cheika is the new man in charge of the Wallabies after a chaotic few weeks led to the resignation of Ewen McKenzie, just days ahead of their overseas tour. Waratahs coach Cheika has been appointed on a three year contract, effective immediately.

Former coach McKenzie quit on Saturday, following the Wallabies 28-29 loss to the All Blacks in Brisbane. He had said that his decision was made regardless of the result, and left the Australian Rugby Union with a bit of a challenge to find a new coach just days before a gruelling overseas tour.

A few names were speculated about but Cheika is the unsurprising appointment, having risen to the top after succesful coaching stints at both Leinster in Ireland, and more recently with the Waratahs.

Cheika will retain his coaching role with the Waratahs until the end of 2015. He has said he’s humbled by the appointment of new Wallabies coach, ahead of a huge year for rugby next year.

“I never imagined I would be in the position of coaching our national team and feel extremely honoured to have this opportunity,” the 47-year-old former Randwick player said.

“My mission will be to do the best possible job I can and to motivate the people around me to ensure they are able to represent Australia to the best of their ability.

“I feel the key to any future success will be to ensure we have a strong identity and not letting anything get in the way of our preparation to succeed on the world stage.”

The Wallabies leave on their end of year tour on Friday, with matches coming up against the Barbarians, Wales, France, Ireland and England. A 33-man squad has been chosen, with no place for Kurtley Beale, but it includes the return of injured players Matt Toomua and Ben McCalman.

The Qantas Wallabies squad for the 2014 Spring Tour is: