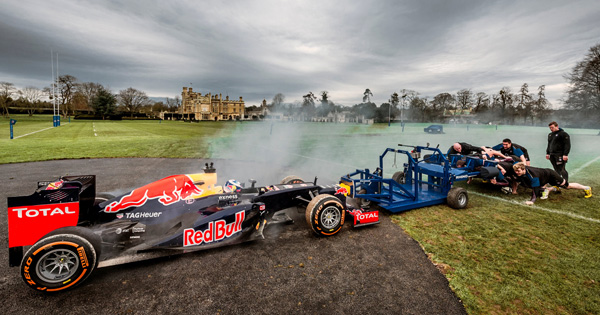 Red Bull Racing and F1 driver Daniel Ricciardo have taken on Bath’s forwards in the ultimate scrum session, with the force of eight hundred horses up against eight mere mortals. With 900kg of muscle on home turf at Farleigh House, Bath were up for the challenge.

“It’s not every day you get to do something like that,” said tighthead Henry Thomas. “We love testing ourselves on the biggest stage but not many players can say they’ve scrummed down against a Formula One car”.

Ricciardo, a winner of three grand prix titles, said: “I was excited about the challenge as it’s definitely something I’ve never experienced before! Seeing the rugby players take their positions behind the scrum machine right in front of me was somewhat… strange.

“But my competitiveness kicked in and I was determined to beat them!”