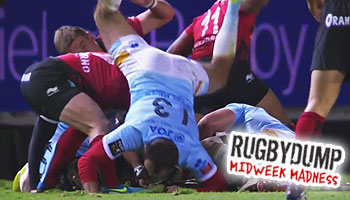 Perpignan captain David Marty was shown a yellow card for a bizarre bit of play during their Top 14 Round 12 clash with Toulon at the weekend. The European Champions won the game 15-9, with Jonny Wilkinson kicking all of their points.

A number of first choice players were on international duty and the match itself didn’t feature too much to write home about, with Toulon only managing to score a solitary penalty when the Catalan home side were reduced to 13 men in the first half.

Centre David Marty tracked back as Toulon attacked midway through the first half, but a bit of a possible brain explosion resulted in him landing headfirst after leapfrogging a ruck.

He was told the error of his ways by Juan Smith, then penalised and yellow carded by the referee.

Perpignan picked up a losing bonus point and with Toulon unable to get an attacking bonus point, they are fortunate to top the table after that performance. They are joint top with Clermont, but take the lead due to having a superior points difference. Toulouse are one point behind.

There is a another funny version of this floating about too, featuring R Kelly… View it here

Marty doing a bit of flying over the ruck. Credit to gilontano for the amusing edit.