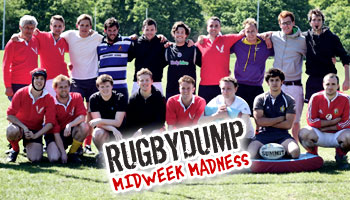 The Rugby Club on Sky Sports did a segment recently that focused on an amateur rugby team, the Clapham Falcons, from South London Division 5. The result is truly fascinating, and highly entertaining, but be prepared, it gets very weird..

We’re always looking for top quality rugby content here on RD, and this short docu feature is no different as we get an inside look into the lives of three young professionals plying their trade in London, while drinking, living, a breathing rugby.

RD was able to catch up with them to get their thoughts on being the stars of such a segment, but unlike the norm, we’d encourage you to jump straight to the video now, then come back to read more later so as to avoid any spoilers. So stop reading now, and hit play below.

I caught up with Oliver Blazeby , who plays 6, sometimes 7, to find out more about the guys who took us into the deepest, darkest places of their rugby obsessed lives. His alter-ego, Dan Jones, who works for a production company, told me that Don’t Drop the Egg, a mokumentary, is the result of 9 months off writing, directing, editing, and of course, acting.

It’s a satirical look at rugby players, and more specifically, the privileged university rugby types that most of us will have encountered at one time or another. The obvious question arose, ‘Do you all actually still play rugby?’

“We all DID play rugby, now we are just fans,” said Dan, who plays Blazeby, the die-hard of the bunch who has clearly taken one too many knocks to the head.

“Interestingly we all played a little at university and started to recognise these characters, and 3 years on we have made something with them very much in the front our minds.

Tom Magnus, who plays Freddie Shepherd , works with Dan, and then Orry Gibbens, who is a stand-up comedian, plays the self-obsessed pretty boy flyhalf, Archie Curzon .

“We were drawn together rather easily and had a good base knowledge of what we intended to do. We all liked to make people laugh at school, and all probably were in a Shakespeare play as well,” said Dan. And what about the budget?

“We had no budget, other than the small amount we put in ourselves to cover things like wine, face paint, pitch hire etc. Orry and Dan still owe Tom about half the ‘budget’.”

It has possibly best last line ever. I was curious as to who came up with it.

“The last line was actually thought up by our cameraman Tim Colman: The invisible 4th member of The BoomTown Twats who keeps us together and tells us when we are shit.

“It was a struggle; we had the line ‘ There aren’t many games where you would break a limb for a mate ‘ which is actually rather honest, real and moving assessment of rugby. The last line just flipped that on its head, the 2 line together summing up the film perfectly.”

If all goes to plan, we’ll be seeing more of Archie, Freddie, and Blazeby on RD sometime soon.

The videos are presented in three parts below, totaling 40 minutes. Enjoy.