Midweek Madness - Japanese player loses the ball over the tryline 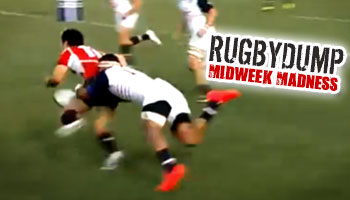 A few months back we watched on in horror as Japan made an awful mess of a try at the Hong Kong Sevens. Against the USA at the weekend they did it again, this time with winger Kenki Fukuoka, who lost the ball in an attempt to get between the posts.

While we joke about things like this, Eddie Jones coached Japan are actually on an incredible run of form and they kept that up with a 37-29 victory over the USA Eagles in the Pacific Nations Cup.

Tries were scored by Ryu Koliniasi Holani (two), Fumiaki Tanaka and Akithito Yamada, while fullback Ayumu Goromaru converted all four and kicked three penalties for a 17 point haul. Cam Dolan crossed for the USA while a Blaine Scully hat-trick wasn’t enough to beat the Brave Blossoms.

This year the Pacific Nations cup is split into two conferences for the first time ever, with Pool A featuring Fiji, Samoa and Tonga, while Pool B comprises of Japan, Canada and the United States.

In a moment reminiscent of George Gregan on Jeff Wilson, Fukuaka crossed for a try in the 15th minute but took too long to get the ball down as he attempted to get it beneath the posts, and had it slapped out of his hands as USA center Folau Niau made the tackle.

Despite the error early in the game, Japan went on to achieve their ninth straight win.

Official highlights from the USA vs Japan in Carson, California