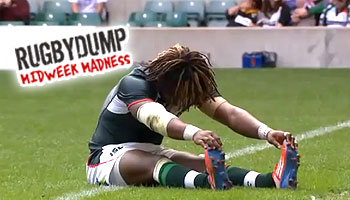 London Irish flyer Marland Yarde has been in great form so far this season, with many touting him to be an England regular in the not too distant future. He’s scored some good tries in the past few weeks, and one that has to be seen to be believed.

Yarde, who hails from the Caribbean, is a genuine Test rugby prospect and has his eyes set on the 2015 Rugby World Cup. He hopes to become the first St Lucia born player to represent England.

Having moved to the UK aged nine with his family, he recently spoke of how the 2003 World Cup Final in Australia inspired him to take up rugby, despite not knowing much about it.

“To be honest I didn’t even know who Jonny Wilkinson was, or any of the players. It was just the sport, enjoying the whole atmosphere and how the sport was played. I found it was really exciting. That really sparked my vision to want to be part of this sport and play,” Yarde said.

Having made his international debut against Argentina earlier this year, the 21-year-old hopes to add to the two tries he scored in their 51-26 second Test win. “Having just tasted international rugby I’m really hungry for more,” he says. “I know the World Cup is going to be massive and being in the squad is definitely something I’d love to achieve.

“In no way do I feel like the finished article but Stuart Lancaster has made a point that age doesn’t really matter. I want to do whatever I can for London Irish to put myself in the best position towards that World Cup.”

If that means running in tries when suffering from injury, so be it. We saw exactly that a few weeks ago in the Aviva Premiership, as Yarde was down getting treatment for cramp but spotted an opportunity, so promptly hopped up and got into a great position in support.

It’s not the first time we’ve seen this type of thing happen. Both Brian O’Driscoll and Kurtley Beale have done similar, which naturally brings up the question of legality, as while it’s funny to see, it probably a little unfair, especially when the doctor or physio is already on the field.

Do you have any thoughts on whether a law should be in place to prevent this type of thing from happening, or is it just a freak occurence that shouldn’t really be taken very seriously? Also, do you think Yarde should be an England regular by the time the Six Nations rolls around?