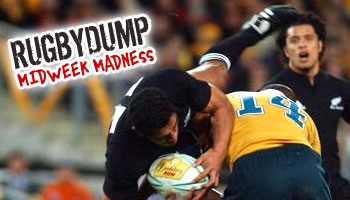 I often feel for fullbacks. One of the most exposed positions on the field, any errors you make are clear for the world to see. Poor clearing kicks are scrutinised, and dropped high balls normally result in one thing – more up-and-unders heading your direction.

All Black fullback Mils Muliaina is one of the most talented players in the game though, and is particularly good under the high ball. He’s as cool as a cucumber, even if he has gorillas charging down at him while he has his eyes on the ball, unaware of their presence.

Against the Wallabies in the Bledisloe Cup in 2003, Muliaina found himself under not one, but two well placed up-and-unders that he got up high for and took easily. The problem for him wasnt the catch, it was the manner in which he came back down to ground.

First, Wendell Sailor took him in the air, resulting in a card for Big Dell and a painful landing for Mils.

Then, realising the fullback may be feeling a little weary still, less than 5 minutes later Larkham puts it up on Muliaina again. He once again takes brilliantly, but is once again taken in the air, this time by hooker Brendan Cannon.