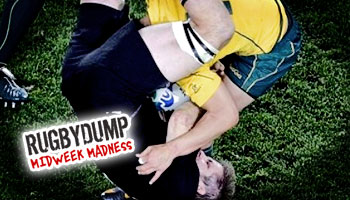 As you know by now, the All Blacks are through to the RWC final, where they will play France. On the way there they beat the Wallabies quite convincingly. Richie McCaw was a man possessed, so here is a short clip of him that many have requested.

The All Blacks beat the Wallabies 20-6 at Eden Park, with McCaw coming out on top in the battle with David Pocock, another brilliant No.7. The New Zealand captain had come into the match under an injury cloud, but showed no signs of having a much talked about dodgy foot.

He carried well all night, made numerous tackles, and led from the front as only the 102 capped veteran knows how. He hailed his side’s intensity after the game.

“We are very happy with that and we have next week to look forward to, but I’m proud of the way the guys fronted up. The intensity was there – every single man out there did their bit, and that is what you have to do in knockout rugby. It was awesome. We realised that we were going to have to front up, we had to be on the job for 80 minutes,” he said.

If the All Blacks are to beat the unpredictable French in the final, they’ll need McCaw to be on top of his game once again. He might also need to climb on top of a few Frenchman, as he did to Wallaby center Anthony Faingaa in the first half. There had already been a knockon so it didn’t count, but he somehow affected the turnover anyway, ripping it from Faingaa while upside down. Freakish.