Midweek Madness - The All Blacks show their skills in new advert 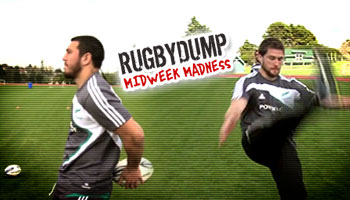 Sky NZs Rugby Channel have come up with a new advert that is sure to get plenty of attention. It features All Blacks Cory Jane, Piri Weepu, and Rene Ranger at training pulling off incredible passes, kicks, and no look catches. But how original is it?

Following on from the recent success of the viral Roger Federer trickshot campaign, where R-Fed knocks a can off an assistants head twice with two pinpoint serves, the Sky NZ channel have come up with their own version as the talented backs show off their skills.

The Federer video was largely a success, with Gillette benefiting from over 7 million views on Youtube alone. That ad in itself wasnt an entirely new concept, and this latest viral attempt has very close ties to a NFL Fantasy Football campaign from 2008, where players performed tricks very similar to what we see the All Black boys doing.

Original or not, it does make for great viewing and you yourself can decide whether you think the things they do are genuine.

“The guys are three of the real characters in the team and had a lot of fun shooting the promo and we hope fans get a bit of a laugh out of it as well,” an All Blacks spokesman said.

While many believe that what they do in this clip is, or even could be real, Sky TV declined to comment, but Cory Jane did slip up on Twitter yesterday.

When asked about the authenticity of the ad the All Black wing tweeted “My bit is real haha nah I did it bout 10 times and didn’t even get near the bins.”