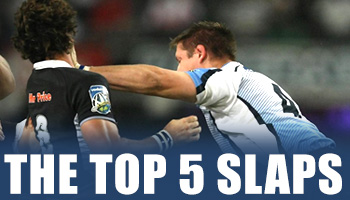 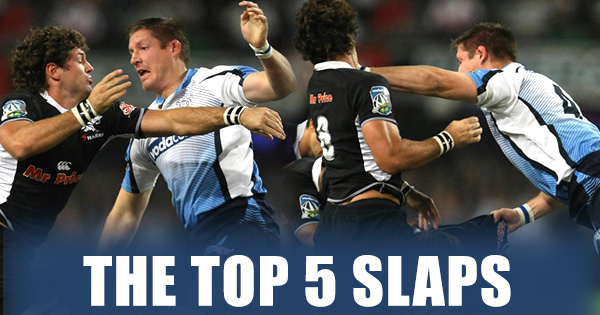 And now, time for something completely different. James takes a look at the Top 5 Slaps, ever.

Right or wrong, there comes a time in the course of every rugby player’s life that the actions of an opponent require some sort of negative attention.  The player wants to let his opponent know that he has erred, and to warn him not to continue his unsavory behavior.

He doesn’t want to harm his team with a booking though. This is when you’ll see the savvy rugby player employ one of the oldest tricks in the book: The Open Handed Slap. Sure, its no handshake or pat on the back, but it certainly isn’t a closed fist, is it?

Which ref is going to risk being labeled an agent of the game’s gradual softening by carding someone for something as harmless as a light slap? It’s a great tool for any rugby player to keep in his or her back pocket. Now, I’m not advocating for any type of violence on the pitch.

But I am saying that there is an art to a player avoiding a card in making a point. So, to honor the hallowed tradition of the slap, we’ve compiled the five best uses of slaps or slap fighting ever committed to film. Here we go.

5. Julian Savea and Eben Etsebeth slap one another while smiling

Here we have two giants of the game gleefully engaging in the time-honored tradition. Both make some beautiful connections, and both know that no harm is being done. Look at those smiles! I don’t think Eben Etzebeth even blinks as he’s shown the full scorn of Julian Savea’s palm. Notice how both Cheslin Kolbe and Schalk Burger walk by them as if they were street performers. Nothing out of the ordinary; just two men sorting out their differences.

Go ahead and fast forward to just before the 3:00 mark for some great slap analysis from commentator Justin Marshall on an unequivocally great slap from the other Du Plessis, Jannie, on Hurricane’s flanker Karl Lowe. Marshall’s declaration of “that’s a slap. That’s annoying getting slapped like that, so you can respect the response” has a rightfully accepting tone to it.

A quick exchange by two legends, notable for its machine-like efficiency. James Horwill, upset with Bismark Du Plessis’ behavior, goes upside Bismark’s head with a powerful right. Bismark, a veteran of the game and a brother of a proven slap-legend, doesn’t need a moment to think about it, and reciprocates with a right of his own.

“You have wronged me at the ruck!” says Horwill. “You have slapped me and now I’m slapping you back!” says Du Plessis. The slaps cancel each other out and the boys get back on the job.

Although most commonly useful in post-ruck skirmishes, the slap can come in handy in other scenarios as well. None was more crucial than Joe Worsley’s last-ditch slap that kept France out of the 2007 World Cup Final. And what a glorious slap it was on Vincent Clerc.

This technique has been called the “Ankle tap.” This is an obvious misnomer. Does that look like a tap to you? A tap is what a conductor does with his baton to tell his orchestra to quiet down. What Joe Worsley unleashes there is a slap, a slap with the hopes of a nation riding on it.

1. Flanker gets away with sneaky slap at scrum

This is the single greatest filmed use of the slap in rugby history. We know not what club or level from whence this clip comes to us. All we know is the man’s name: Michael Fletcher.

His sneaky slap is executed with discretion, quickness, and accuracy. And what a sound the slap has on it. The ref must have thought lightning had struck.

There’s a shout owed to the opposite flanker who took the slap, as he gives but half an instant’s reaction to the slap’s sheer audacity before getting on with the scrum as if nothing had happened. That’s what the Rugby slap is all about. “Nice work, Fletch,” a spectator guffaws. And he is not wrong.

Samoan player falls to the floor after worst fight ever

The Blade Thomson Self Slap after high five goes wrong

Posted By: jfaccinto
Thanks
Sorry there has been an error