Midweek Madness - Tom Varndell sneaks in for a great try 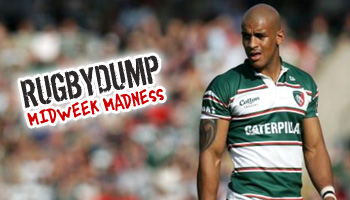 When the Leicester Tigers hosted London Irish in front of a capacity crowd in November of 2006, there was one man who left the field with his head held high after scoring two special tries, and another who was looking for the nearest ditch to bury his in.

The Tigers came out tops 26-18, mainly due to a great kicking display from Ian Humphreys, but more importantly, two tries from speedster Tom Varndell, the second of which came from a moment of extreme opportunism.

A huge clearing kick from Humpreys sailed downfield, travelling the length of the pitch before appearing as if it would run over the dead ball line.

Michael Horak, former Leicester and England full back, delayed touching the ball down as he seemingly presumed it would go dead, and had not been alerted of the impending threat posed by the rapidly advancing Varndell.

The England winger sprinted over 90m and came out of nowhere to beat the oblivious Horak to the ball, thus scoring a truly remarkable try.

This defensive howler was just as much down to poor judgement, communication, and awareness, as it was to Varndells tremendous speed and determined chase.

Its very similar to two other tries weve seen over the years, one being the famous Rob Howley incident of 2004, and the other from January this year with another flyer, Richard Haughton .

Great to watch, but never nice if it happens to you.