Midweek Madness - Too much beer for Pukey McNasty 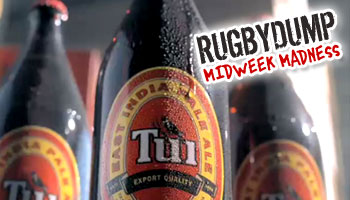 As New Zealand ran riot against Samoa last week, notching up a century in front of a proud home crowd, this fan obviously let the festive atmosphere get the better of him.

As the tries flowed , so did the beer, and as most of us know, drinking at sporting events can often go horribly wrong. The crowd, the girls, the mates, they’re all ingredients for one thing – too much alcohol consumption.

What goes down must come up, or something like that, and the timing by this guy couldn’t have been better. As Ma’a Nonu ran at the gap, we see Pukey McNasty (as we’ve affectionately labelled him) leaning over the advertising boards to do his thing.

Now, this was most probably coincidence, either that or the most elaborately planned advertising campaign of all time, but take a look at what the advertising board actually says, and the message it displays.

When receiving an email about this clip this morning, my natural response was why on earth would I want a clip of a guy spewing on Rugbydump. I’m still asking myself the same question, but I know that the person who requested it found it funny, as did the two mates watching with him, as do I.

Weak stomach, prude, or purist – you may not like it. For us though, it’s hilarious, and by sharing the video, this young fan now has his 15 seconds of fame, albeit for the wrong reasons.

Credit to the guys at Sky NZ, who first spotted this. On a related note, if you haven’t watched the highlights of the New Zealand vs Samoa romp, you can do so here now.