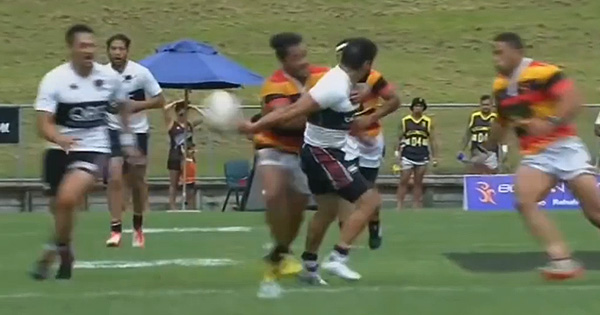 ‘Whiria Meltzer’ sounds like something from another planet, so it’s no coincidence that the man with the superstar name was behind this sensational pass during the Bayleys National Sevens in New Zealand. He’s hardly a household name but this North Harbour flyer is fast becoming one.

The Rotorua Sevens tournament produced some top quality action, with this try being one of the most memorable. Meltzer, a personal trainer by profession, was interviewed after the match.

“I didn’t really think about it, bro – just threw it. And it stuck” he said of the epic no-look pass.

While North Harbour made the Cup Final, they were trounced 54-14 by Counties Manukau.

Check out the Related Posts below for more brilliant passes