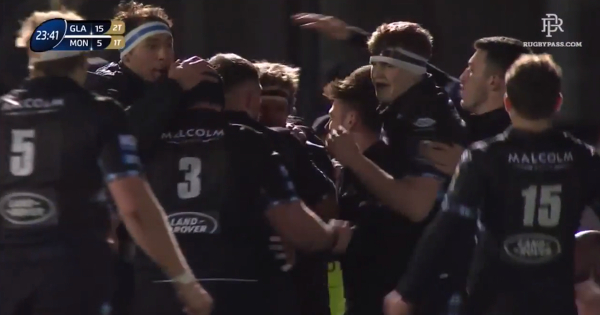 Montpellier kept their European hopes alive, after holding off a spirited Glasgow Warriors side at Scotstoun on Friday night. The 29-22 victory sees the visitors move into second in Pool 3, alongside Exeter Chiefs ahead of their game against leaders Leinster on Sunday.

The home side started the match well and found themselves 17-5 ahead just after twenty minutes, following tries from George Turner and Leonardo Sarto with Finn Russell adding the extras from the boot.

Russell also showed exactly why Racing 92 see him as the right man to replace Dan Carter, after his handling and sublime pass in the lead up to Turner’s try.

However, the celebrations were short-lived for the Warriors and Turner, as only four minutes later he found himself on the receiving end of a yellow card for a late hit on Louis Picamoles.

Montpellier used the man advantage and upped their tempo with a try from Kelian Galletier after the half-hour mark.

Glasgow were again forced to rue indiscipline just before the half, as Montpellier were awarded a penalty try after a maul had been brought down illegally with referee Mathew Carley taking out the yellow card once again, this time it was Jonny Gray sitting out for the ten.

The visitors extended their lead after the half with a try from Jaques Du Plessis, with Francois Steyn continuing his fine form from the boot.

Glasgow mounted a spirited fightback with another try from Sarto, again set up from Russell this time with a deft chip. Despite the pressure applied in the final ten minutes, Montpellier held on to claim victory and keep their chances of getting out of the pool alive.