Montpellier pick up two red cards against the Saints 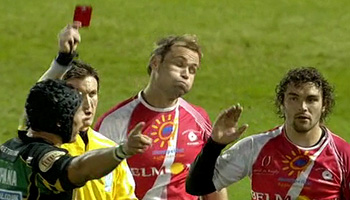 It was a convincing 51-7 win for the Saints as first half tries from Scott Gray, Joe Ansbro and a penalty try allowed the Saints to command the game, with Chris Ashton gaining the bonus-point in the 56th minute. Scores from Soane Tongauiha and Paul Diggen sealed victory.

Montpellier were at one stage playing with 12 players on the field as the they had two players red carded, and two minutes from time, another picked up a yellow.

Captain Julien Tomas was red carded for his alleged punch that took place during a nasty looking tangle with fiery young Saints hooker Dylan Hartley. A minute earlier there was another scuffle, and at that point it looked as though something was about to give.

The clearing Hartley arm to the face of Tomas was the spark that ignited the fuse, and we saw a bit of fisty cuffs break out, resulting in the aggrieved looking Tomas being picked out for landing punches.

Late in the game, hooker Fabian Rofes was given a red card for stamping as he carelessly trod on Ignacio Fernandez Lobbe. The referee had no hesitation in sending him off, compounding Montpelliers misery.

“It is hard, because when you get a bit of confrontation like that you have got to stand up for yourself. But you have to almost take it on the chin and be disciplined enough not retaliate because we certainly didnt want any yellow or red cards for the boys. A lot of the guys managed to handle it pretty well.

“It is a man’s game and when you get hit, the normal reaction is to hit back, but we’re trying to retaliate by putting points on the scoreboard.”