Montpellier turn it on at home against Stade Francais 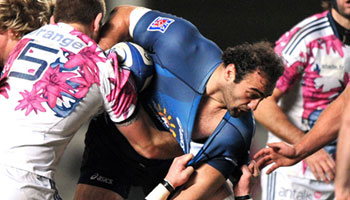 Montpellier scored some outstanding tries as they made a challenge for the Top 14 playoffs with their 38-6 demolition of Stade Francais on Friday. It took a while for them to get going but once they did, they did it in style.

Fijian winger Timoci Nagusa played a large part in the first try, a genuine contender for try of the season. He combined brilliantly with flyhalf Francois Trinh-Duc as they found some open space and counter-attacked from deep in their half.

While two forwards were up in support, it was Argentinian wing Martin Bustos Moyano that got on the end of the 80m effort. Moyano actually ended with a personal tally of 26 points as he scored two tries and kicked the points for the home side.

It was Montpellier’s third successive win in the competition and they now sit in fifth place in the standings. Enjoy the highlights below that show Montpellier playing some unbelievable rugby.