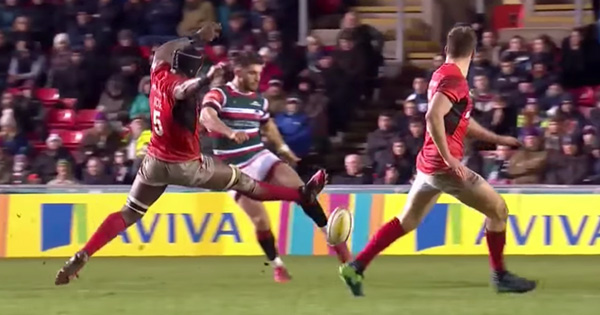 Maro Itoje’s unique skill set has caught the eye again, this time after he blocked a kick with his extremely large boot. Why not? Referee JP Doyle needed to check the laws, but it turns out that the Saracens kingpin was well within his rights, and executed it perfectly.

A few months back we saw him produce a piece of wizardry to steal the ball in a tackle, now this.

We haven’t seen this type of ‘charge down’ happen too often, and there was no contact with the boot, which is perhaps why it was allowed.

As mentioned in commentary though, in football (soccer), going in with studs up is clearly outlawed due to how dangerous it can be. Aside from the brilliance of the effort, are you of the opinion that it was dangerous play, or is that a bit of a stretch ?

Either way, it’s incredible agility for a big guy. Oh, and apparently he can slam dunk rugby balls, too.