Morne Steyn kicks Springboks to victory over the Wallabies 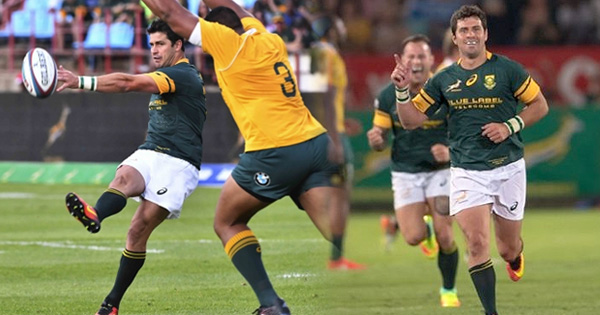 Morne Steyn kicked South Africa to a 18-10 win over Australia in Pretoria on Saturday, breaking their string of successive defeats. The Wallabies scored the only try of the match, while Steyn returned to the starting lineup to kick four penalties and two drop goals.

Springbok coach Allister Coetzee said the Springboks’ win was an important boost to the team’s confidence for the remainder of the season.

“It was an important win, not only for our confidence, but also self-belief,” said Coetzee. “I am a very happy man and will never underestimate any test win. For a team that had their backs to the wall, a win like this means a lot and is a definite confidence booster.”

“Our defence was outstanding and our set-piece delivered the needed pressure on them when we needed it, which resulted in points for us at crucial times,” he said.

“Morné [Steyn] justified his inclusion. He showed he is still a test match player. He remains proud to play for the Springbok and that showed.”

The victory sees them move up to second on the overall Rugby Championship table, with the Wallabies in third ahead of their historic match against Argentina at Twickenham. Tickets are still available via ticketmaster for £20 www.ticketmaster.co.uk

The Springboks now travel to Durban, where they will play New Zealand on Saturday.

Watch extended highlights (15 mins) of this match on page two