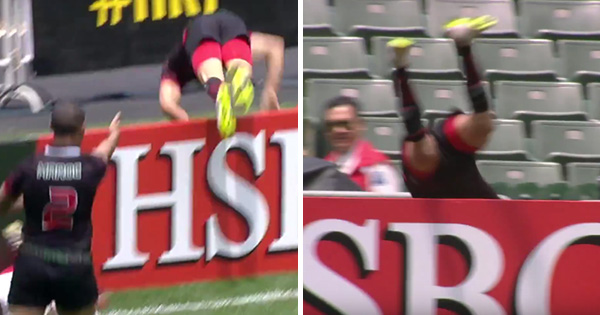 Morocco produced one of the upsets of the opening day at the Hong Kong 7s by beating Tonga 19-17 in Pool G’s qualifyers. Moroccon playmaker Adil Achahbar scored a well taken try in the win, but got a bit too close to the deadball line and as a result, flew over the advertising hoardings.

Thankfully he was okay, and brushed it off with a little salute to the crowd for good measure.

To be fair to Achahbar, the organisors might want to rethink their placement of the boards.

In the qualifying event, 12 teams are racing for promotion to the main Sevens Series, and after day one it looks as though Japan – previously relegated – are the team to look out for.

Despite Morocco’s heroics against Tonga, Japan later beat them 45-0, while Tonga went on to beat Brazil 26-5. Japan had earlier beat Brazil 36-0, so they top Pool G.

See the related posts for more players flying over the advertising boards!