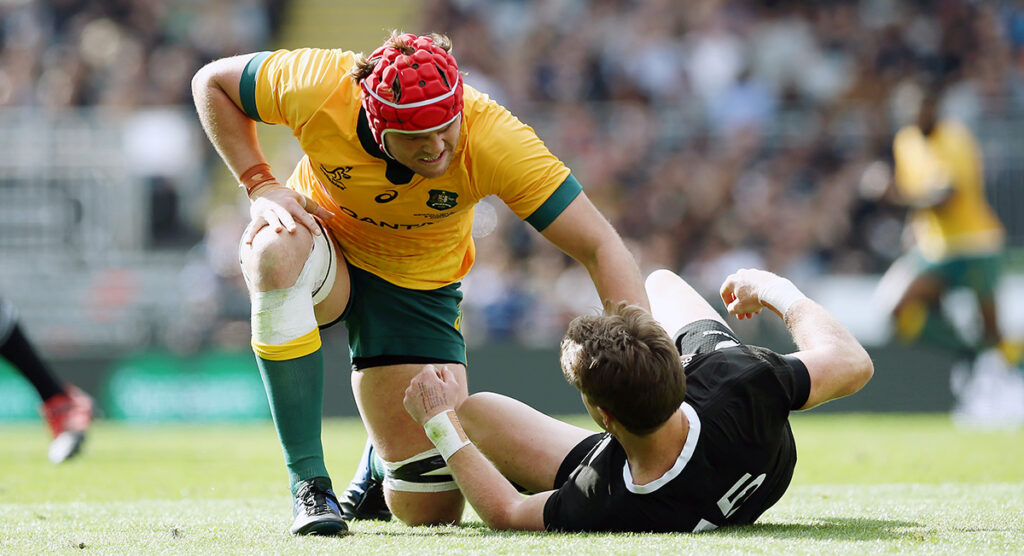 It’s been well documented how Wilson spent 36 hours in an Auckland hospital last week before making a miraculous recovery in time to tackle the mighty All Blacks on Sunday.

But the 20-year-old back-rower only detailed his extraordinary week on Wednesday after returning to Australia for the final two games of the series in Sydney and Brisbane on October 31 and November 7 respectively.

Wilson said what started as a small cut, which he can’t even recall how it came about, developed into boil cellulitis that rendered him immobile less than a week after making a memorable Test debut in Australia’s series-opening 16-16 draw in Wellington.

“It was a bit different to a usual game week. I just had a little bit of a cut on my foot on Monday and then it progressively got worse,” Wilson said at the unveiling of the Wallabies’ latest Indigenous jumper.

“I did a big training session on Wednesday and then my foot was probably the size of two shoes.

“So on Thursday I had my foot all up and Friday we decided it was probably best to go to hospital to get it sorted.”

Wilson was pumped with antibiotics and spent almost every waking minute icing the foot in his race against the clock.

He was eventually released from hospital on Saturday afternoon, less than 24 hours before going into battle in Bledisloe II at Eden Park.

“I pretty much didn’t move for 36 hours just to get it all out,” Wilson said.

“The swelling left and I kind of knew (I’d be OK to play) because about every four hours I was able to walk on it a bit better.”

Continuing his Cinderella year, Wilson’s foot fitted beautifully into his shoe and the Wallabies hardman managed to play 50 minutes in Australia’s 27-7 defeat.

“The boot ended up fitting on pretty well so I didn’t really notice it on game day, which was good,” he said.

Wilson did enough to suggest he’ll be retained for Australia’s must-win showdown in Sydney.

But, furious with seeing his side miss 40 tackles, Wallabies coach Dave Rennie threatened to wield the axe.

One player unlikely to back-up is midfield playmaker Matt Toomua, who is still awaiting the outcome of scans after limping off before halftime with a recurring groin injury.

“However long he misses, he’ll be a big loss,” his Wallabies and Melbourne Rebels teammate Dane Haylett-Petty said on Wednesday.

“He’s one of the leaders of the team and he’s probably been close to the form player so far, shifting out and doing a job at 12 and leading the defence.”

The Maori All Blacks have named a strong side featuring two capped All Blacks and seven debutants to face off against Moana Pasifika on Saturday.

'He's only going to get better': Former All Black names the youngster to watch out for in Super Rugby 2021

There are less than 24 hours until fans across New Zealand will know who exactly has been named in their Super Rugby squads for the upcoming campaign next year.

Sexton played down the significance of those recent injury troubles and revealed he is drawing confidence from former Leinster team-mate Brad Thorn.

The Highlanders have announced the signing of a former co-captain as a new member of the franchise's coaching staff ahead of the 2021 season.