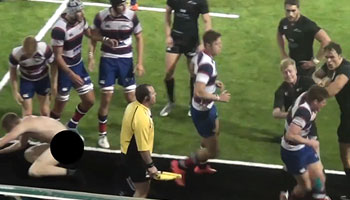 The annual Varsity match between Northumbria and Newcastle University took an unfortunate turn for the worse when a streaker took to the field, pipe and all, and attempted to make a tackle out on the wing. He then snuck away, as chaos ensued.

Streakers are usually quite comical and stay out of the way but this guy was fearless, slotting into the Team Northumbria backline as if he were one of the players. He helped to bring down Newcastle’s winger, before they piled into him, which Northumbria took exception to.

He then snuck off unharmed, pipe still in mouth, while the two sides had a go at one another. The crowd soon joined, and it was quite an ugly scene – reportedly not the first of the match, after a player had already been yellow carded for fighting.

“This is the worst thing to have happened in the history of the clash of the titans,” said the dramatic Newcastle Student Radio commentary.

The naked man avoided security and scampered off, safely exiting stage right as the fans from both sides chanted and added to the mayhem.

Northumbria won the clash 29-10, with their coach later commenting “It’s always hard in a derby match”. In this case, we can only hope he was referring to the match.