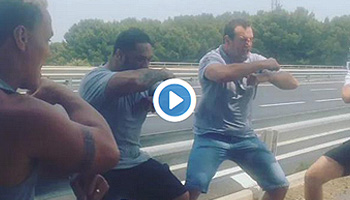 Former team mates of the late Jerry Collins have been paying tribute in their own ways, as the rugby world continues to mourn the loss of the former All Black, who died alongside his partner, Alana, in France last week.

Here is a look at one of the latest tributes, tweeted by Neemia Tialata today.

Tialata, Byron Kelleher, Chris Masoe, Carl Hayman and Ali Williams came together at the scene of the accident to perform an emotional Haka, their way of saying farewell to team mate, and friend. Collins was just 34. His 3-month-old daughter remains in critical condition.

Toulon number eight Masoe bleached his hair in honour of Collins, and in this video shares a striking resemblance with the 48-times-capped All Black, and Hurricanes, loose forward.