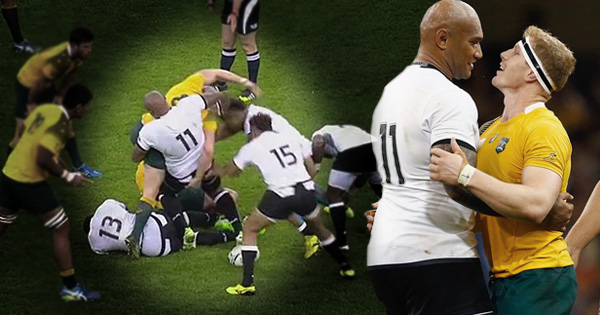 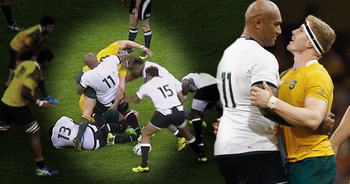 Fiji’s giant winger Nemani Nadolo has been banned for a week for an incident that occurred during their 28-13 loss to Australia in their second Pool A match. London flyer Asaeli Tikoirotuma has since been called up for the match against Wales in Cardiff this Thursday.

Much talked about Nadolo, particularly after scoring in the opening game against England, was adjudged to have committed an act of foul play. It was reported that it was a tip-tackle, but as you will see below, a dangerous clean out at the ruck is probably more accurate.

“He did not consider there to be any aggravating factors. However, taking into account mitigating factors including his excellent disciplinary record, the judicial officer reduced the suspension to a period of one week.”

As you can see below, the Crusaders winger went in to clean out breakdown menace David Pocock, but appeared to do so in a dangerous manner, leaving Pocock a little uncomfortable.

Pocock has said the following of the incident however: “I remember feeling like my leg got a bit stuck and my knee was in an awkward position, so I kind of pushed off backwards and kind of jumped to free my leg and then sort of flipped backwards and one hand was on the ground.

“I would say that I have definitely contributed to that, but yeah, got up and got back into it. I think me flicking backwards and pushing backwards definitely added momentum to it.”

While we can only see one angle below, up to four angles were supplied for the process.

Nadolo has scored Fiji’s only try of the tournament so far, and contributed 16 of their 24 points. He will be replaced for the Wales match by Tikoirotuma, himself a lethal winger but is obviously not quite as imposing as the 130kg giant Nadolo.

After hearing of Nadolo’s ban, Welsh flyhalf Rhys Priestland reportedly commented that “There’s a few happy boys down in the team room.”

Read the full disciplinary hearing, and view the Wales and Fiji teams below the video

If the video doesn’t work for you, watch the incident on the next page, here