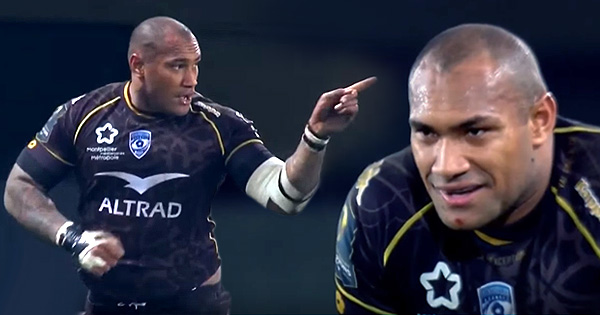 Fiji and Montpellier winger Nemani Nadolo put in one of the performances of the weekend as he blasted through the Northampton Saints defence to help his side to a 26-17 victory on Friday night. He scored twice, and caused havoc whenever he had ball in hand.

His first moment of brilliance came as he pulled in three defenders in a tight channel down the wing, then somehow offloaded for flanker Kellian Galletier to run in and score untouched.

He wasn’t done there though. In the second half he channelled his inner Jonah Lomu to brush aside no less than 5 tacklers, including big winger George North. And that was after a bit of a fumble.

The 130kg former Crusaders winger then scored again late in the game, securing the victory.

“There was one outstanding performance from Nadolo,” said Saints coach Jim Mallinder. “I thought he was absolutely on fire today so a lot of credit has to go to him and the way he played.”

Humble as ever, Nadolo himself wasn’t all that pleased with his showing on the night.

“I’m improving week in, week out and this was just another game to prove my worth. I’m playing with some of the best players in Europe and it probably wasn’t one of my best games, but I took my opportunities when they came,” he said.

“I’m not the fastest winger in the world, but I have size and I try to use that. It was good to break a few tackles and get over the try line.”

View Nadolo’s sensational performance, then full match highlights below that