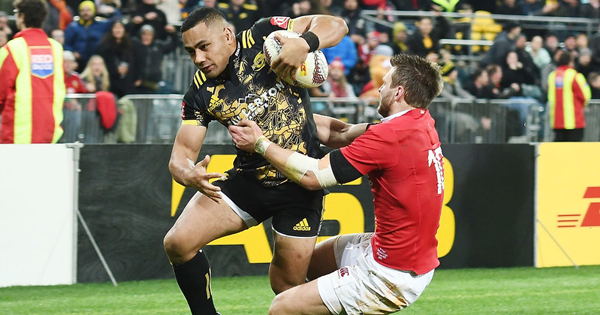 Outstanding young Hurricanes centre Ngani Laumape has been rewarded for his impressive form with a call up to the All Blacks bench for the second Test against the British and Irish Lions on Saturday. Laumape finished this excellent try for the Hurricanes on Tuesday.

The 24-year-old, who played four years of Rugby League and was actually a forward when playing Union at high school, has had a stellar season of Super Rugby, combining well with Vince Aso to make it easy for fans to forget about the legendary pairing of Ma’a Nonu and Conrad Smith.

Laumape will make his Test debut in front of his home crowd in Wellington. His strong performances this year saw him lead Super Rugby for line breaks and defenders beaten and he’s currently joint leading try scorer with 14 tries.

This effort against the Lions was just another stunning piece of Hurricanes backline play, and signaled the beginning of Laumape terrorising Lions flyhalf Dan Biggar, who made a courageous tackle over the line but felt the full brunt of it.

The bruising young centre then attacked his channel repeatedly throughout the contest, which was a thrilling game but ended in a stalemate, 31-31.

You can make your prediction with a bet on the result of the 2nd test with www.betway.co.za/