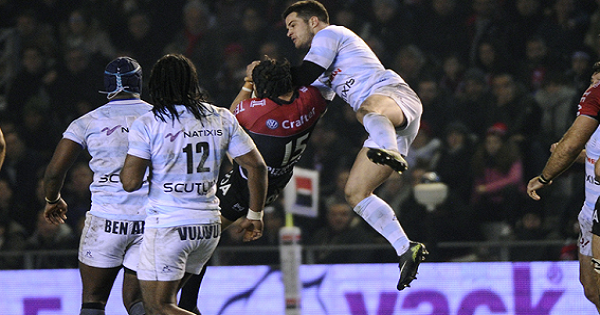 A lot has been said about World Rugby’s new law directives introduced this year to curb the amount of dangerous tackles. Last week saw Bristol’s Tusi Pisi controversially sent off for a challenge in the air. This week, Racing 92 fullback Brice Dulin was shown yellow for a similar incident against Toulon.

Unlike Pisi, Dulin was clearly challenging for the ball against opposite number Leigh Halfpenny. The Welsh full back landed on his back and appeared briefly winded by the fall. Dulin can be seen keeping his eyes firmly on the ball and even jumped higher than Halfpenny.

Nevertheless, referee Romain Poite ruled that, on outcome-based incidents, Dulin had not placed Halfpenny safely onto the ground and thus showed the French internationalist a yellow card.

For his part, Dulin highlighted his disbelief by almost laughing at Poite’s decision.

The new directives determine that if a player lands dangerously, regardless of the offending player’s intent, that offending player must be subject to either a yellow or red card, depending on the severity.

At best, it is a directive that needs ironing out as in both incidents from the past week have seemingly punished those who have shown no intent.

It remains, and will continue to remain a heated debate throughout the coming months.

Has this new directive gone too far? Did Dulin deserve to be sin-binned?