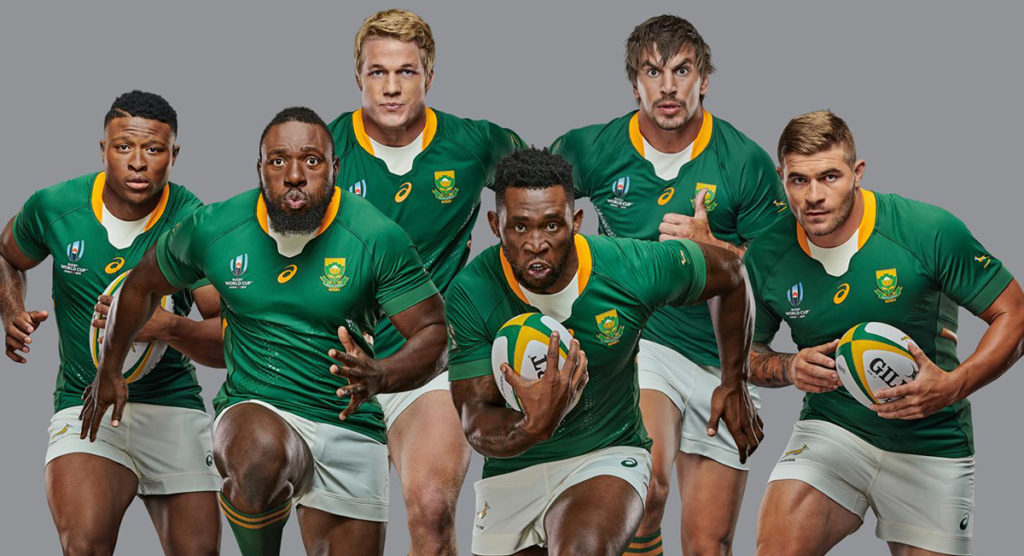 The Springboks will be wearing an “unstoppable” jersey, designed and manufactured by SA Rugby’s official apparel and footwear sponsor ASICS, which features technological advancements to give the men in green and gold an extra edge at the Rugby World Cup in Japan later this year.

The new Springbok jersey, which will go on sale in South Africa on Friday, was designed with unique characteristics and features to compliment the playing style and technical requirements of the Boks.

At the same time, ASICS launched an all-new brand film, “What is the difference?”, which offers an inside look into the dedication, sacrifice and focus it requires for a professional rugby player to be selected to represent his country on the biggest stage that rugby has to offer.

“It’s a momentous year as the Springboks aim to win our third World Cup in Japan,” said Jurie Roux, CEO of SA Rugby. “Every little detail counts and that includes all the focus and effort put in by ASICS into making this the most advanced jersey for the Boks to wear in Japan and support them in their quest to reach their goal.”

ASICS and the Springboks tested more than 10 versions of the jersey with 30 different fabrics at their laboratories in Japan.

Players were also interviewed about their requirements to give them the necessary advantages on the field, and the message was clear – they don’t want to be restricted by anything and want to feel “unstoppable”.

“I don’t want to be restricted by anything when playing,” said Springbok Test centurion Tendai Mtawarira.

“The jersey is the perfect balance between fast and strong – and it’s challenging to reach that. ASICS have produced a jersey that not only meets but surpasses expectations of what we wear on the pitch.”

Based on this feedback and in-game analysis, ASICS was motivated to create an “UNSTOPPABLE” jersey, devoid of any loose fitting areas or unnecessary tightness.

Alistair Cameron, President and CEO of ASICS Europe, Middle East and Africa, said: “The launch of the new Springbok jersey is a chance for us to further expand brand awareness and exposure within the South African market, whilst continuing to support the Springboks in their quest to become the number one rugby side in the world on the biggest stage world rugby has to offer.”

Furthermore, as with the RWC tournaments in 2011 and 2015 and in line with World Rugby’s commercial requirements for playing apparel, the Springbok emblem will again move to the left sleeve of the jersey, with the South African national emblem, the King Protea, the jersey manufacturer’s mark (ASICS) and the RWC emblem on the front.

Closer to the of the Rugby World Cup, ASICS will also be launching a series of tongue-in-cheek videos aimed at helping visitors to Japan as well as supporters watching from home to get insights into local customs and traditions featuring some of your favourite Springbok players.

The Springboks start their 2019 Rugby World Cup campaign against New Zealand on 21 September 2019.

The all-new Springbok jersey will be available in sport stores in South Africa from Friday, 26 April 2019 and worldwide in June 2019.