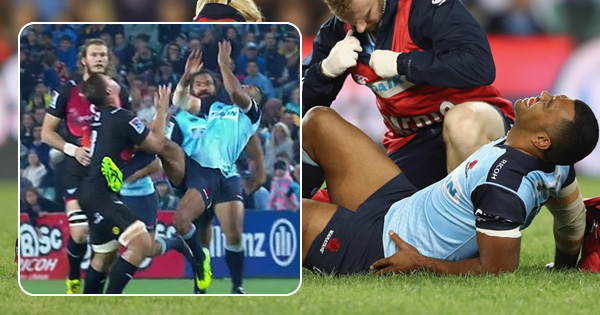 On Friday it was announced that Kurtley Beale had signed by Wasps for the 2016/2017 season, reportedly on a hugely rewarding contract. A day later, as the Waratahs hosted the Bulls in Sydney, it took just 26 seconds for his world to be flipped upside down.

Professional sport can be a great leveller and while Wallaby Beale was riding the wave of success, he had his legs taken out from underneath him, and his remaining months at the Waratahs changed completely.

His attempted contest for a high ball shortly after kickoff looked innocuous enough, but as he put all his weight on the left knee, the patella tendon tore from his patella (kneecap).

While Beale, still only 27, was meant to join Wasps at the conclusion of the Super Rugby season, he now faces four to six months sidelined, with the next six weeks in a range of motion braces.

Surgery on his left knee was successful, with a good fixation of the patella tendon back on the patella bone. The prognosis was much better than expected given the tendon remained intact, requiring less invasive surgery, and that the injury was isolated with no other damage to the knee.

Beale has overcome adversity on numerous occasions in his career so while this will be another big challenge, his goal of getting to the UK will no doubt remain in tact.

“It’s going to be difficult to leave the Waratahs at the end of this season – I first joined the Tahs when I was 16 and have loved every minute of it, but I feel the time is right to make this move,” he said on Friday.

“I am only 27 now and I know my best footy is ahead of me, both at club and Test level.”

We wish him all the best with recovery, and hope to see him in action again soon.

See the injury here, then below that a discussion with former Wallaby Stephen Hoiles