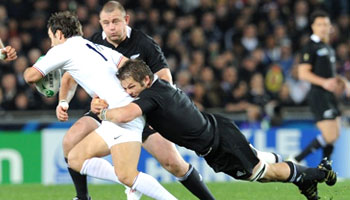 All Black captain Richie McCaw notched up his well earnt 100th Test Cap earlier today when New Zealand beat France 37-17 in Auckland, to take the top place in Pool A of the Rugby World Cup. Before that, England ran riot against Romania, winning 67-3 in Dunedin.

The game had been picked as somewhat of a revenge contest for the All Blacks, who had famously been knocked out of the tournament by France in both 1999 and 2007, in the Semi Final and Quarter Final respectively. Today they put that well and truly behind them with a strong performance against a more than handy French side, who despite having an experimental halfback pairing, will be tough to beat for others.

Early on it looked as though New Zealand would run away with it as they scored a few quickfire first half tries through their brilliant backs. France managed to compete in the second half, and scored a few tries of their own. They were never really back in it though, and the hosts one this one comfortably.

The win means that they will face the runners-up of Pool B, which will probably be either Scotland or Argentina, while it looks as though France could be facing England in the quarter finals.

It was a great occasion for skipper McCaw, who not only avenged the disappointing loss in Cardiff four years ago, but achieved the fantastic milestone of picking up 100 Test Caps. McCaw, the 1017th All Black, received a silver cap in a special presentation after the match. It was handed to him by former captain, and leukemia and non-Hodgkins lymphoma sufferer, Jock Hobbs. McCaw was humbled, and clearly quite emotional when speaking.

You can view the interview below. Highlights of the game can be viewed via the RWC website.