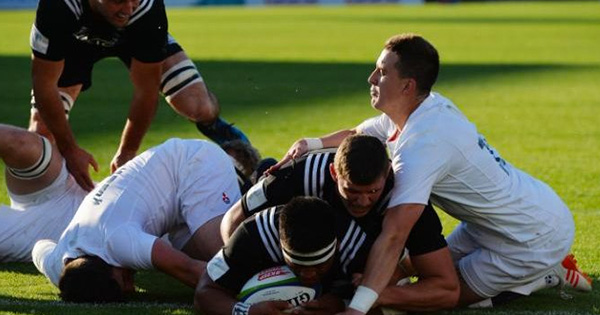 New Zealand ran in an astounding 10 tries as they soundly beat England 64-17 in the World Rugby U20 Championship final in Tbilisi, Georgia on Sunday afternoon. Dynamic hooker Asafo Aumua continued his brilliance scoring a hat trick in the win for the Baby Blacks.

These are the two most successful teams in the competition, with New Zealand coming into the final having won it an amazing five times and England – the 2016 champions – owning four titles of their own.

However, there was to be no repeat for England as New Zealand got off to a blistering start and never really let off the gas.

Hooker Aumua claimed two tries in the first half, and was joined by Dalton Papali’i, Pouri Rakete-Stones, Isaia Walker-Leawere, and captain Luke Jacobson to make the score 40-7 at the break.

England managed to run in three tries of their own, with Ben Earl, Alex Mitchell, and Josh Bayliss all touching down in the losing effort.

With his combination of power and pace, Aumua looks similar to another famous New Zealand hooker who at the moment is working on a return from injury. If the young gun continues this scorching trend, he should get a call up in no time.