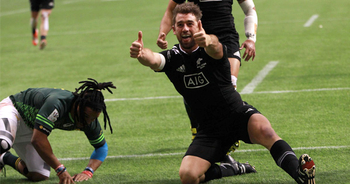 New Zealand were crowned winners of the inaugural HSBC Canada 7s after edging South Africa 19-14 in a scintillating Cup Final in Vancouver. Here is a quick recap for you in case you missed it on another busy rugby weekend.

Both finalists were phenomenal throughout the tournament but it was New Zealand’s Kurt Baker who scored a scorcher in the first half that gave the All Blacks their third Cup triumph of the 2015/16 season.

After smashing Wales 31-0 in the quarter finals , the Blitzbokke withstood a fierce challenge from Fiji in the semis. New Zealand also snuck by into the final with a narrow 24-19 victory over Australia. The Aussies then beat Fiji in the bronze final.

Samoa won the Plate final with victory over Samoa while Canada prevailed in the Bowl final against France. Propping up the finals, Russia beat Portugal to win the Shield.

Speaking of his side’s latest triumph, New Zealand Captain Tim Mikkelson: “We struggled last week in Vegas with the new team, getting our combinations together but this week we really wanted to go better and I am just so pleased we won the final because it has been a hard week.”

The HSBC World Series standing could not be closer as the circuit moves on to Hong Kong in April. Fiji, despite their 4th place finish retain their lead with 106 points, while South Africa are close behind in second on 105. New Zealand are in third with 104 points.

You can view the day 2 highlights from the inaugural HSBC Canada 7s in the video below, and highlights of the first day’s action on page two of this post