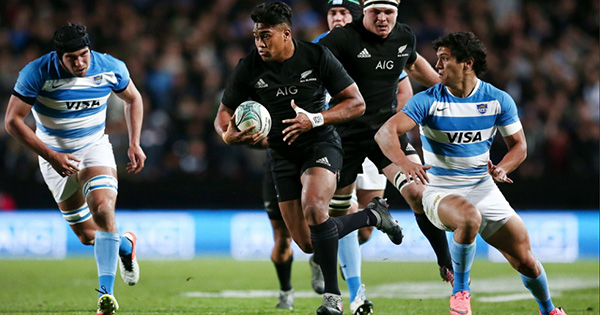 New Zealand remain undefeated throughout the Rugby Championship after being pushed well into the second half against a very aggressive Argentina side in Hamilton. They now turn their attention to South Africa, who went down to the Wallabies.

Like many others before them, Argentina seemingly could not keep up the blistering pace, despite trailing only 24-22 with 53 minutes played. The All Blacks yet again, found another gear and won their third consecutive bonus-point victory 57-22.

At times early on in the match, it could be said that Argentina looked well in control and appeared to have solved the All Black defence. New Zealand relied heavily on some key substitutions and finally gained firm footing.

Coach Steve Hanson said: “It was an ideal game for us… we were put under a lot of pressure in the first half and had to find some answers looking at ourselves a little bit coming in at halftime.”

Although at this point they may seem rather unstoppable, the potential threat of this coming weekend’s opponent is certainly not lost on players in camp.

Jerome Kaino especially takes note, saying: “We know that every time the All Blacks play the Springboks, it’s always been tight. They’ll want to bounce back and they want to get a win so we’ll be preparing as we always do and we’ll be expecting something tight.”

#STATCHAT The last 4 matches played between #AllBlacks & @Springboks have been decided by 7 points or less#NZLvSAF pic.twitter.com/vsvd3K89bd

Kaino also knows how aggressive Argentina were and that South Africa will have given special attention to those tactics: “Argentina put us under a lot of pressure and they’ll have put that under the microscope and they’ll try and put that into practice this weekend.”

Certainly not helping things is the sombre tone being set in the South African media. According to writer Rob Houwing, “Confusion reigns supreme… these Boks look devoid of structure, clear-cut strategy, cutting edge and composure.”

However, Lock Sam Whitelock is giving full respect to the perhaps wounded South African beast. Speaking of the lineout, he admits: “We didn’t have a really good night and it would be an area that is critical against a good set-piece team like South Africa.”