New Zealand snatch 7s victory with 8 men on the field 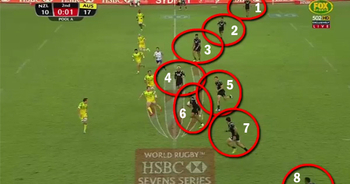 One of the biggest talking points of the Sydney 7s weekend was New Zealand snatching a draw at the death against hosts Australia, but with an extra man on the field. World Rugby are reportedly investigating the embarassing incident.

World Rugby have stated that the result will stand but disciplinary action could follow, pending an investigation into what was the second week running that the All Black Sevens team have won a crucial match due to questionable officiating.

Video footage shows that there were eight players on the field in the lead up to Ardie Savea’s winning try that levelled the pool match 17-17, and helped them progress to the next round.

“World Rugby can confirm that it is investigating an apparent breach of Law 3 (number of players on the field if play) by the New Zealand sevens team,” the governing body said in a statement.

“In accordance with Law 3.2 the result of the match will stand, but World Rugby is currently reviewing the matter to determine if any disciplinary action is warranted. No further comment will be made until the outcome of the investigation.”

New Zealand topped Pool A on points difference and went on to meet Australia again in the cup final, winning 27-24 with another late try.

Ironically referee Craig Joubert was in charge at the time, the same referee that controversially awarded Australia a penalty late in the quarter final against Scotland at the Rugby World Cup.

Australian 7s coach Andy Friend says that World Rugby need to act quickly to ensure that the debut of 7s at the Olympics isn’t marred by these type of controveries.

“The question is how can that happen? In an Olympic year, if that comes down to a gold medal game, well what’s the point?” he said. “Our boys, when they came off, they said they couldn’t understand how they had the numbers out there.

“What we have to make sure is that those simple mistakes don’t happen in a big tournament.”

He added that the governing body need to take a closer look at the sanctions for the eight-man breach, as currently it appears to only be an on-field penalty.