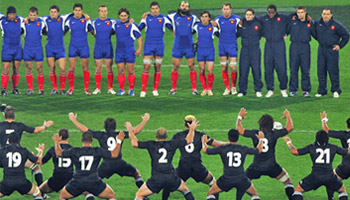 Highlights of the second test vs France.

Another dazzling performance by the All Blacks. They had a bit more structure and well and truly ran over the French in the final stages. An AB turnover results in the only French try, but other than that…it was one way traffic.

Ali Williams broke his jaw…Poor guy. And Jerry Collins hurt his funny bone near the end of the game. Probably because he broke someone’s nose with it.

Good performance by the men in black…But can they take that on the road to South Africa in a few weeks, when the play the Springboks to start their Tri-Nations campaign. Or have the Boks simply saved their best for the ones that matter?