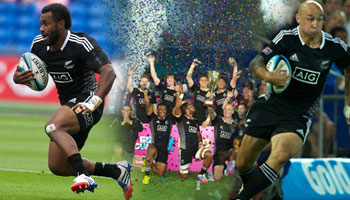 New Zealand beat rivals and hosts Australia 40-19 to win the Gold Coast Sevens and take an early lead in the HSBC Sevens World Series at the weekend. Catch up on the highlights from the knockout stages, as well as everything from day one.

Ambrose Curtis scored twice as New Zealand came from behind to win the tournament and get their defence of the series title off to a great start.

The hosts started well with a 12-0 lead but their trans-tasman rivals scored twice through Curtis, then David Raikuna, Waisake Naholo and Joe Webber.

England, under a new coach this season, won the third place playoff by thrashing South Africa, following their 14-5 defeat to the overall winners in the semi-final.

Australia reached the final after a narrow 24-19 win against South Africa, thanks to a late Jesse Parahi try deep into sudden-death extra time.

Ben Ryan’s Fiji claimed the Plate, while France beat Canada to capture the Bowl and the USA beat Portugal to claim the Shield. After round one New Zealand have 22 Series points and a three-point lead over Australia (19) with England (17), South Africa (15) and Fiji (13) not far behind.

View the knockout stage highlights below, and highlights from Day One on the next page

Day 1 highlights from the Gold Coast Sevens in Queensland, Australia