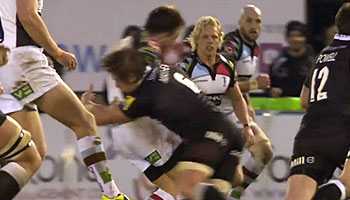 This is a very quick clip of a great tackle that happened in Round 9 of the Aviva Premiership, in the game between Newcastle Falcons and Harlequins at Kingston Park. Harlequins came away with a comfortable 35-9 victory.

Quins scored four tries to get the bonus point win but Newcastle made one of the hits of the game, with flanker Mayhew timing things really well to come in and smash winger Sam Smith.

You can see that Smith stayed down for a while, and Mayhew’s timely intervention probably prevented a try as Harlequins had a clear overlap out wide. Smith did recover, and scored two tries.

Mayhew also has a very impressive moustache, no doubt part of his Movember effort.

On a side note, this was Newcastle coach Dean Richards’ first game back against his old club, from which he was famously banned following Bloodgate in 2009. The irony was that Tom Williams, who was very much involved with that whole controversy, scored the first try of the game.

“I couldn’t give a toss who scored the first try,” insisted Richards afterwards.