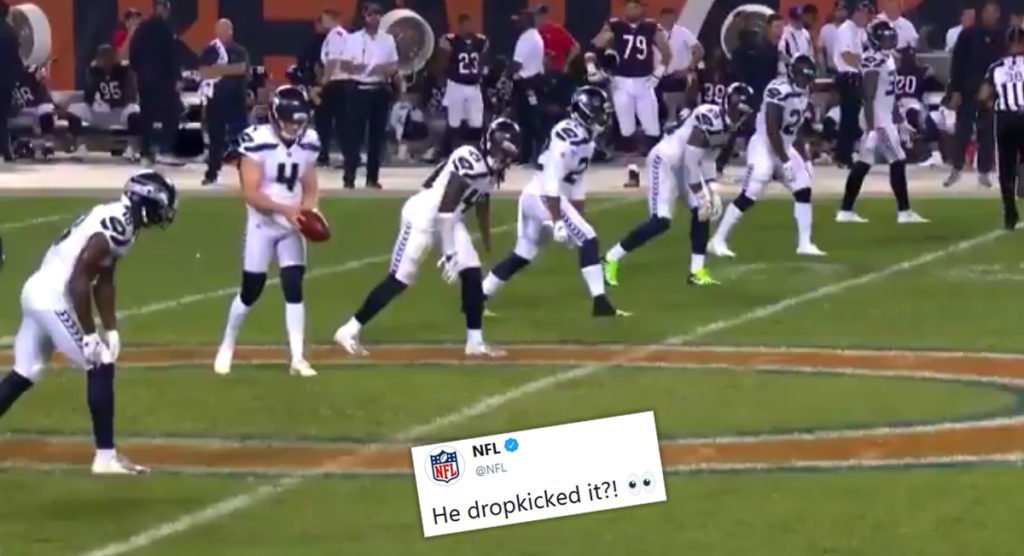 Seattle Seahawks punter Michael Dickson has grabbed headlines with NFL fans around the world after his method of restarting play with a second-half kickoff against the Chicago Bears on Monday night.

A perfectly executed drop kick pinned the Bears back inside the 20, doing exactly what was required of him and blowing fans’ minds in the process.

The 22-year-old rookie punter from Australia later attempted a drop-kick onside kick in hopes of his team regathering the ball with 14 seconds left on the clock, but it didn’t work out and the Bears won 24-17.

While rugby union might not be able to officially claim that Dickson has history with the code (he played Aussie Rules at a decent level), it’s great to see a ‘footy’ influence coming through.

USA rugby Sevens player Nate Ebner reportedly tried a drop-kick kickoff for the New England Patriots in 2015, and back in 2005 Doug Flutie famously did a drop kick for the extra point, the first of it’s kind in the NFL since 1941.

So while this wasn’t the first time the league has seen it, Dickson has certainly caused a bit of a stir, and perhaps in time more players will see it’s benefits.

The drop kick was actually an important part of the sport in the 1920s and 1930s but as the shape of the football changed to become more aerodynamic, so did the kicking technique. Maybe Dickson has shown that it’s not as difficult as some might think.

Some NFL fans were naturally a bit confused when this drop kick story made headlines.

When I read dropkicked I imagined this 😂 pic.twitter.com/qr6B8YGcYr

And speaking of rugby skills in the NFL, there was also this nice moment recently when 7s player and Superbowl winner Ebner passed the football to one of the officials in traditional rugby style.

Here is that Doug Flutie drop kick that’s mentioned above.