Nick Abendanon sin-bin puts inconsistency in the spotlight yet again 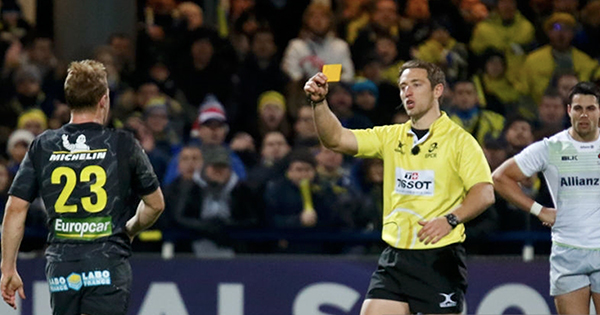 A dizzying final quarter produced a yellow card for each side, with Saracens’ Juan Figallo following Clermont’s Nick Abendanon into the bin, setting up a nail-biting finale to the game.

Abendanon was sanctioned for taking out George Kruis in the air at the restart following Owen Farrell’s penalty which had brought Saracens to within two points of Clermont.

It was a fairly clear-cut penalty, with Abendanon getting his timing all wrong in the challenge for the ball. But while a similar incident with Saracens’ Sean Maitland in the first half resulted in a simple straight-arm penalty, TMO Simon McDowall had other ideas.

Referee Andrew Brace seemed to have made his mind up and cited the similarities between the two incidents. However, McDowell overruled Brace and recommended a yellow card, much to the dismay of the Clermont supporters.

It has once more opened the debate as to whether the referee or the TMO should ultimately have the final decision on cases of suspected foul play.

Abendanon himself was a bit bemused with Brace’s decision but chose not to dwell on it too much in light of the result.

Speaking to BT Sport post-match, Abendanon said: “Well I thought it was pretty similar to Maitland’s one in the first minute of the game. If anything, I think his was probably worse than mine.”

World Rugby Law 10.4 (i) states: “Tackling the jumper in the air. A player must not tackle nor tap, push or pull the foot or feet of an opponent jumping for the ball in a lineout or in open play. Sanction: Penalty kick”.

Referees or TMOs are able to escalate the ultimate sanction to a yellow card or worse if the player lands on his head or neck. However, in this case, it is the consistency in the decisions which has angered some.