Nick Crosswell gets jersey ripped off but plays on anyway 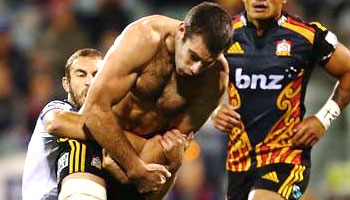 The Chiefs lost 41-23 to the Brumbies on Friday night, their second loss in succession following the narrow defeat to the Crusaders a week prior. Here’s a quick comical moment from early on in the game, when forward Nick Crosswell had his jersey ripped off, but played on anyway.

A week earlier it happened to Brodie Retallick, and we’ve seen the same thing happen to Sharks flanker Jean Deysel before, where his jersey was ripped off by Rene Ranger, but he played on.

You can view a few funny similar incidents in the Related Posts below, including some great ball in the jersey tricks from years gone by. Mamuka Gorgodze’s in particular is worth seeing.